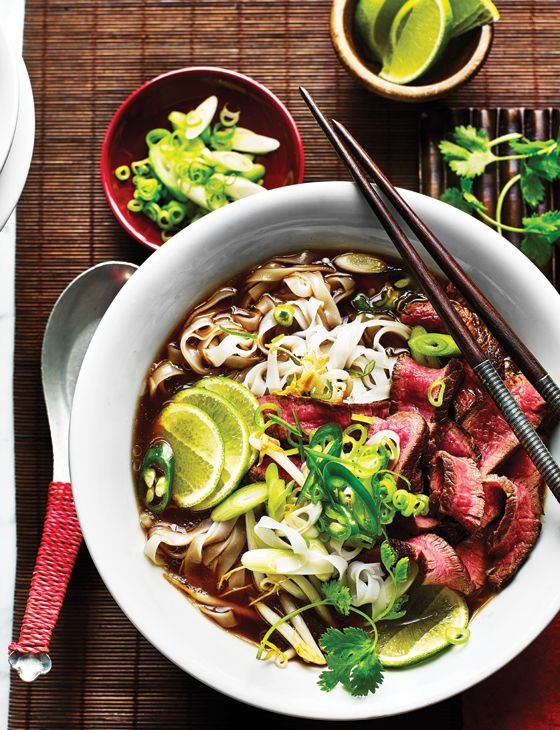 Vietnamese food is a cuisine that is distinct and unforgettable. It relies on a balance of salty, sour, sweet, and hot flavours, achieved through the usage of nuoc mam, a fermented fish sauce, cane sugar, tamarind and chilli peppers or the juice of kalamansi citrus fruit. Vietnamese dishes use a variety of fresh herbs but tend not to be overly spicy, as chilli sauces are separately served. In this article, we’ve picked ten Vietnamese foods that everyone should try.

Vietnam’s national dish, one of the country’s greatest staple, is pho (pronounced “fuh”). This noodle soup can be eaten at any time of day but primarily at breakfast. The basic bowl of pho includes a light beef or chicken broth flavoured with coriander and ginger, to which are added flat rice noodles, broad, slivers of chicken, pork or beef, and spring onions.

Bun cha is a Hanoi specialty that you can find at food stalls and street kitchens across the capital city of Vietnam. The pork is barbecued on an open charcoal brazier and then served on a bed of cold rice noodles with foliage and a broth.

Bun Cha is served with grilled pork and eaten with a variety of herbs such as coriander and mint.

Goi Cuon are translucent spring rolls packed with coriander, greens, and various combinations of sliced pork or shrimp. A southern version consists of barbecued strips of pork wrapped up with star fruit and green banana, and then dunked in a rich peanut sauce. Each bit as tasty as it sounds.

This baguette sandwich filled with greens and a choice of fillings, including pork or beef and paté is so good. It has been imitated in many places around the world.

These enormous, cheap and filling Vietnamese pancake is made with pork, egg, shrimp, and bean sprouts, which is then fried, wrapped in rice paper with vegetables and fruits like green mango and dunked in a fish sauce (called Nuoc Cham in Vietnamese) before eaten.