Canada has their fair share of great cuisine from sweet and salty dishes to their version of the Bloody Mary in the Caesar. Here are some of the top tasty Canadian dishes from Canada. 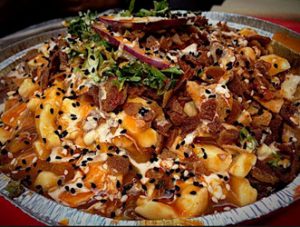 Poutine is a dish with origins in French Canada and has become known as the countries signature dish. It made up of peppery meat gravy smothered on top of cheese curds and French fries. The famous side dish was thought to be invented in 1950, and several small towns in Quebec claim to have invented the dish. You will find Poutine at most restaurants in Canada, and they even have it on the menu at McDonald’s.

Canadian Bacon is known in Canada as pea-meal bacon but called Canadian Bacon in the rest of the world. This type of bacon comes from lean pork loin that has not only been brined but also rolled in cornmeal as well. This is different than typical bacon, which comes from the belly of a pig. Around 1900 pork was exported from Canada to England and to preserve the meat on the voyage it was rolled in yellow peas, but now it is rolled in cornmeal. 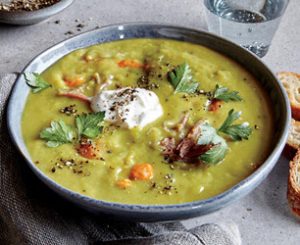 Split Pea Soup has an interesting story as for 400th anniversary of the travels of French explorer Samuel de Champlain chef Marc Miron was interested in what the early explorers ate in their new land. Back in the day, the explorers would use things that could last on a long journey such as cured meats and dried peas. Vegetables were added and out came split pea soup, which is still very popular these days not only around Canada but in the United States as well.

Tourtière is a French-Canadian dish that dates back hundreds of years. It is a flaky pie, and the name of Tourtière is thought to be derived from the ship that it was made in. Usually, the pie has ground meat, herbs and spices, and potatoes. Different kinds of meat can be used to make the dish, and on the coastal regions, some will even use fish. Tourtière is very popular during the holiday season. 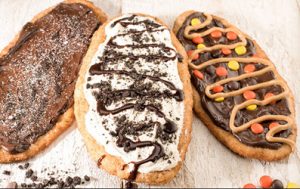 BeaverTails are basically a doughnut that does not have a hole and has been flattened. This is a very popular Canadian treat, and while invented by Graham Hooker’s family, who had the recipe for decades it was not introduced to the public until the late 1970’s. In 1979 Hooker opened the first BeaverTails outlet in Ottawa. The tasty treat can be topped with several things such as sugar and Nutella.

Butter Tarts are very rich and sweet and very popular throughout Canada. The origins of the tar-tar thought to be around 1900, and it is a delicate tart that crumbles easily and has a cream filled centre of butter, sugar, and eggs. Many places that serve butter tart also add raisins, and you can find them at most bakeries and coffee shops.

The Caesar is the one drink on the list and was invented in 1969 in Calgary by restaurant manager Walter Chell. It is kind of like a Bloody Mary, as the ingredients are vodka, a salt rim, Worchester sauce, and Clamato juice. Motts is the company that makes Clamato, and they have claimed that Canada makes in excess of 350-million Caesars annually.